The World About Turns 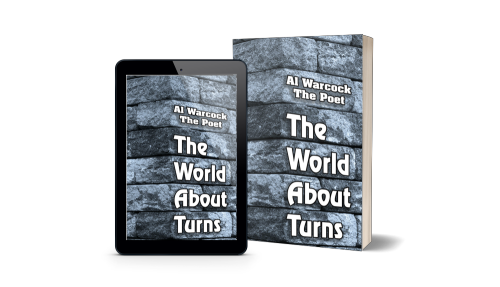 Some books are destined for greatness and ‘The World About Turns’ is just such a book.*

‘The World About Turns’ has been called ‘important’, ‘genius’ and ‘ground-breaking’ but this is just the beginning. This collection of poems draws you into the world of a man as he embarks on a journey through life itself. His story is expressed on every line as the very essence of his soul is distilled in every word.

This book will change your life.**

Sometimes bitter, sometimes slightly less-bitter, this story will take you to the edge of emotion and back, like no other book of poetry you’ve ever been forced to endure. 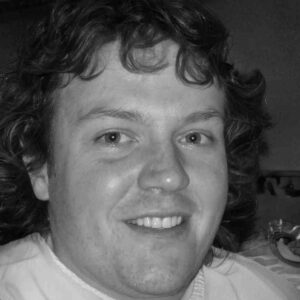 Al Warcock comes from the humblest of beginnings, roots that belie his meteoric talent.

The Poet, as he has come to be known in contemporary poetry appreciation circles has become the defining voice of modern poetry. Without exaggeration, he is the personification of his craft.

Al was born in the claustrophobically small South East London town of Bexley on the edge of the border to Kent, the ‘Garden of England.’ He grew up on the verge between the beauty of nature and the encroachment of what was new and forged of the human spirit. Perhaps this goes some way to explaining his effortless grasp of the nature of humanity and his ability to express it through modernistic interpretations?

Like so many creative geniuses, he found himself an outlier, a social outsider who knew he never truly belonged with the herd. The bitter tang of his uniqueness was a driving force in his creative evolution toward the mighty force for prose that he is today.

Having found his voice he began creating works of modest stature but he was noticed. How could anyone fail to see his brilliance, we now look back and wonder, of course?

The World About Turns

I start as an animal, pecking the ground.

I climb to the top of a very high mound,

Of ground and I hear a sound, or noise,

Or something… It’s the shit I’m walking atop

And it sounds putrid.

The waste of a thousand vented spleens,

Violent eruptions of noise and stench,

Brown and wetness, served up on a plate,

With a side dish of anguished cries.

I don’t care about any of that, though there’s a

Troubling hint of poultry in its pungent bouquet.

My brain is the size of a pea, and if it gets cut off,

I’ll run about like I’m having the best of days.

A single, fatal overdose of the happy-drugs,

I guess. I wouldn’t know. Why would I?

My life is about scratching in the leavings of man,

My own delights wriggle and jiggle and squiggle.

I don’t even know if squiggle is a word.

But I have the intellectual capacity of a sandwich,

And would be moderately better off without my own head.

What the hell would I know?

Someone grabs me from behind.

I flap my wings furiously because I forgot I can’t fly.

Stupid chicken, I think to myself!

A man-beast looks at me with fetid breath.

It’s not a look of love for a precious pearl,

Or a woman perving shoes in a shop window.

It’s a look that says that the time you took

Planning the rest of the day was mistook,

Time that could be better spent any other way.

I don’t know how useful chickens can be.

But because I am a chicken, I’m not thinking this.

I deserve what’s coming. It’s not like I was going

To change the world with my chickeney brilliance.

The greasy fingers around my neck tighten.

Does he want to fight me for my worm?

Does he want to be friends?

Next thing I know, my head is not where it was,

But my body is still. I feel the urge to run.

I thought I’d be better off without my head

I was probably wrong about a few things,

Now I think about it.

And that’s not even the half of it.

I’m dead now, but I watched with keen interest

As my fluffy bits were pulled off one by one.

Looking at myself all naked, I realised I had let myself go.

I look a bit like that actress, if she’d done more cardio.

I looked sad. My heart wasn’t in it, I guess.

Red and yellow stuff is added. I don’t know what it is.

I was just a chicken before, but now an appetising dish.

I guess a curry is smarter than a chicken, but not by very much.

I know people would argue that curry ain’t smart

But get your head around this…

Next time you’re hungry are you gonna order a curry

Or a goddam chicken? Yeah, curry is the smarter choice.

We have the technology. Can’t be bad, I think.

It’s new to me to be able to think.

I don’t have a head,

But I have herbs and spices and they smell like happiness.

That’s how thinking works, it’s all so clear to me now.

I’m not excited to see worms and bugs so that’s good too.

I’m a curry, so there’s still a lot of bugs around

But that’s just how it is.

I can’t see any worms, so that’s something.

There seems to be a lot of heat. I don’t know why.

I’m just a curry, you don’t see many of them winning chess matches.

I wonder what happened to my head?

I wonder if I’m dead?

I wonder if I’ll be served with bread?

I wonder what else rhymes with ‘shed’.

Not ‘worm,’ that’s for certain.

Being a curry was alright, but it didn’t last long.

Before I knew it, I felt myself coming apart

There was a gurgling noise for a long time.

I made a new friend.

His name was ‘sandwich.’ He was once a chicken too.

He came with a pickle, sharp as a knife.

He spoke of the wheel, the circle of life.

How everything that once was would be once more.

All of this has happened before.

Before I knew it, we were sped on our way.

There was a rumble from within.

Then there was a terrible din.

Pickle flashed me a crafty grin,

I had no idea what he was talking about.

Sandwich panicked. ‘It’s the end of the game!’

I think being stuck inside a small-intestine

For that long had made him go a bit crazy.

Then a horrible splashing sound.

A terrible rush from all around.

I was heading quickly to the ground

And ended up in a filthy mound.

There was rupturing, bleeding and screams of rage.

The stench of chilli, cinnamon, and a little sage.

Suddenly there was light from all around. I was free.

Then I was wet. I went splashing down into a filthy bowl

Of brown water with bits of blood in it.

I used to be a curry. I don’t need to put up with this.

I was laying on the ground, just a kind of brown entity now.

All the good had been dragged out of me

And my once beautiful herbs and spices had been turned

Into a smell that would roll your eyelids back so fast

They’d cut your brain in two.

I laid there thinking what differently I could have done.

What mistakes had I made? Did I really have a choice

In all of this? Was this fate? What was fate?

I was lost in my ruminations when… Splat!

You can’t argue with a pickle.

The Edgeverse is what happens when creative people with too much time get their acts together. The results can destroy universes, can change perception, can end destructive conflicts.  You have been warned.

The novel that didn't really start it all but let's pretend it did.

From free to not worth the price. Find them all here.

All free, all the time. Find our ever-expanding list of utter nonsense.

Do you feel like you haven’t gone deep enough down the rabbit-hole? There’s more. There’s so much more.

Follow us as we try to get banned from as many social media platforms as we possibly can.