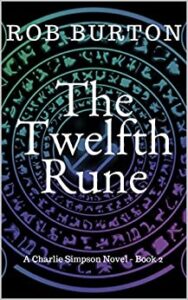 Charlie is a novelist living and working in Marazion, Cornwall with his wife Annie. He once saved the world with the help of a 12th Century Scottish ghost called Nye. But that’s another story. And oh, whether he likes it or not he is “The Chosen One.”
Charlie lives a quiet life trying to put the past behind him and likes nothing better than visiting the local coffee shop and chatting with his Cornish friend Myghal and being served cakes by Lyndsey.
Out on a local clay mine tip searching for amethysts for Annie, his wife’s jewellery business they find a strange 12 sided box buried deep in the cloying white clay, later that evening they open the box to find a large amethyst. Inside the stone is a mark, it is the twelfth rune – Jeren.
This discovery leads them on a frantic chase through the myths and legends of Cornwall, bringing them face to face with King Arthur’s killer – Modred, as they attempt to save the world from the predicted Armageddon. 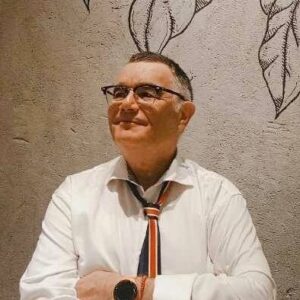 Rob Burton was a professional Sociologist for over 25 years at a number of prestigious British Universities. Now semi-retired Rob works in Hangzhou China, teaching English at a university and writing novels. He also writes for the local Chinese newspaper in their ex-pat section and for the local English language magazine Red Star.

This novel, The Twelfth Rune is firmly set in the Urban/Contemporary Fantasy genre. Rob uses the knowledge he garnered researching his PhD on Cornish Identity and brings his experiences of travelling the world to this story. His academic interest in Cornwall, the Cornish and the Celtic world are to the fore in this novel. Rob has a 22-year-old daughter back in the UK. Snook Doggy Dog, a female Jack Russell that he took with him to China, also features in his books.

The Twelfth Rune is the third book in a series which starts with The Castle of the Red-Haired Maidens (Novella) and is set in 12C Scotland. Nye, the focus of the story, turns up in the second novel Meditations on Murder which is where we meet Charlie Simpson our eponymous hero. I wrote Meditations first but Nye made me write her story!